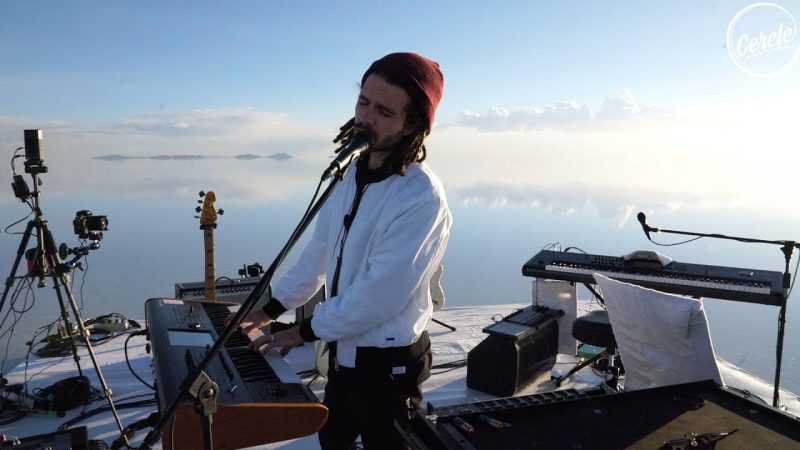 Para One @ R2 Rooftop for Cercle

Special thanks to Terra Andina, Conacine, French Embassy in Bolivia , French Alliance in Bolivia & Live Buzz for all their support.

This performance has been recorded live.

Derek (Cercle):
− So, I’m a bit moved because what we just experienced was incredible, but I wanted to ask how it felt to be playing in the middle of this natural landscape and not in front of people as you’re used to?

Vincent (FKJ):
− Well, there was a lot less pressure, less expectations,
− I didn’t see the reaction of the people in front of me that I usually interpret in a good or a bad way, sometimes I do interpret their reaction the right way but sometimes it completely wrong, in the end it’s all in my head but here there’s no audience so I’m by myself, I’m a bit like in my room except that have something incredible in front of me so it was easier to adventure myself in unknown territories…

Derek (Cercle):
− You lost yourself in your music tonight?

Derek (Cercle):
− It was really incredible.
− There are a lot of people that have been asking questions online but I will start with one which I believe was asked by Emero: How were you inspired by Bolivia and this specific location ?

Vincent (FKJ):
− Well exactly, the inspiration came from the location.
− Here I didn’t want the location to be just a background to my music but my music to be the soundtrack of the location.
− That’s why I didn’t play many of my songs, I played a few that I thought worked well with this location but for the rest I was just looking around and being inspired by this place, by the nature around

Derek (Cercle):
− It’s true that I heard many tunes that I didn’t know so there were a lot of unreleased.

Vincent (FKJ):
− It wasn’t even unreleased.

Derek (Cercle):
− They were never released.

Vincent (FKJ):
− Yeah, they were not unreleased, probably will never be released

Derek (Cercle):
− Well we were privileged to hear them.

Derek (Cercle):
− Often the themes that we find in your tracks are the skyline and the notion of going home: Why those two themes? What inspires you in those themes?

Derek (Cercle):
− Ok, I think we’re going to end the interview now with the mystery box which is a little gift that we are going to offer you. It’s a tradition but with all the emotions I forgot to take it with me, so someone is running to bring it
− As Aurelien arrives I wanted to thank you for this incredible live

Vincent (FKJ):
− Thank you for organizing all of this

Derek (Cercle):
− I also wanted to thank all the technical team, I think there were around 19 people involved who are really incredible people that worked really hard to prepare this show. So, a huge thank you to them because there wouldn’t have been a show without them, thank you
− And here is the gift, that we offer you with a strong wind. It was made by a local shop, Lam, and is 100% Alpaga

Vincent (FKJ):
− I’m going to put it right away because I’m freezing.
− Thank you very much guys, I had a wonderful time. I will listen to it tomorrow because I don’t know how the result sounded

Derek (Cercle):
− It was beautiful
− Thank you, you really honored this location
− Thank you to our partners whose names will appear on the screen and in the credits
− Thank you for being so many of you following us as always and see you in two weeks